Waaigat is an inland waterway connected to St. Annabaai, with a great potential for further tourism development because of its unique location in Punda.

Willemstad, Curaçao – Soon Curaçao Ports Authority (CPA) will start with the project “Tourism Development Waaigat.” The implementation of this project has been made possible with the support of the Minister of Economic Development, Mr. Stanley M. Palm, and the advice of Fundashon Desaroyo Waaigat. Minister Palm believes that this project offers great potential for Curaçao, both during the implementation and in the long term. 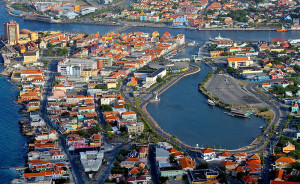 Waaigat is an inland waterway connected to St. Annabaai, with a great potential for further tourism development because of its unique location in Punda. The objective of this project is to develop the Waaigat area in such a way that it will become attractive to both the local population and tourists to spend some time in this area.

As Waaigat has insufficient natural refreshment by sea water there is often an unpleasant smell and the water looks brownish. Therefore the improvement of the water quality has high priority and to achieve this the pumping engines at the edge of Waaigat will be replaced as soon as possible. CPA has already started with the preparations. Moreover research will be done to come up with a definitive solution to refresh the water in the basin.

As an input for the development of Waaigat into a marina the plans of the Fundashon Desaroyo Waaigat (2010) and the Waaigat plan (2007) will be used. After the water quality has been improved the project will continue with the construction of quays for ships and yachts. This project will also have a positive impact on the Curaçao economy. Firstly because of the investments forming part of the activities and secondly because more local people and tourists will visit Waaigat. The means to implement this project are made available by the Government.

For the design and the implementation CPA will be in close consultation with Fundashon Desaroyo Waaigat, the Department of Public Works and other stakeholders.